Last weekend’s bouts at Memorial Hall gave Kansas City roller derby fans more to cheer about, and while one of the evening’s games ended a bit predictably, one certainly didn’t, keeping things fresh as the march to the Rink of Fire continues.

It’s never a good idea to count anyone out, but the way this season has progressed so far, almost no one expects the Knockouts to start dropping games now. This year’s Black Eye Susans are pretty scrappy and formidable, but the Glitter Mafia has been pretty unstoppable, bringing home five wins in five games by an average of 54 points per game. Last Saturday night was no exception as they took the win over the Susans 205-134 in the second bout of the evening.

The real story, of course, was the resurgent Victory Vixens who, up to this point in the season, hadn’t brought home a win all year. It wasn’t for a lack of trying — they even gave the Knockouts a solid run for their money in Game 2 back in February — but somehow, victory managed to elude these Vixens consistently until Game 5 two Saturdays ago when they pulled out a stunner against a Dreadnought Dorothys team many people were expecting to make a Rink of Fire appearance again this year.

They may still; both they and the Susans sit at 2-3 on the season, and they don’t face each other again for the rest of the year, so depending on what happens next month in Game 6, the league may have to do some number crunching to determine which team makes a championship run alongside the Knockouts.

With that in mind, the Vixens’ 147-140 win over the Dorothys last weekend may have marked a turning point in the season for more than just the Red, White, and Blue.

Regardless of where the teams land, it was nice to celebrate a win with the Vixens. 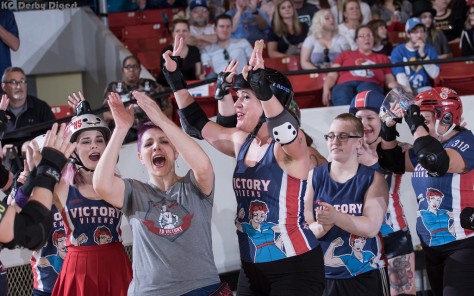 KCRW’s next bout is on June 22, and of course, we’ll remind you of that as the date draws near. Stay tuned to KC Derby Digest for more info on the incredible 2019 season!