The last time the Deadly Sirens competed for the Fountain City Roller Derby championship, the league wasn’t even called Fountain City. It was called Dead Girl Derby. But this Saturday night at B&D Skate Center in Independence, they will indeed take the track once again in the hopes of bringing home their first ever championship trophy.

They’ll be facing off against the heavily favored Shotgun Sheilas, who have experienced tremendous success over the past several seasons, but even at that, still haven’t taken home the Fountain City trophy since 2014.

So someone’s going home with all the marbles for the first time in a while, and we hope you’ll join us trackside for the final event of Fountain City’s phenomenal 2018 season. 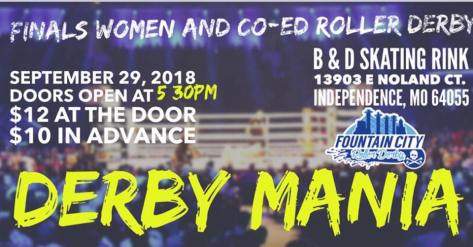 The second bout of the night features the Coed League championship as The Usual Suspects face off against perennial favorites The Untouchables. Coed action has been a fan favorite in Kansas City for a few years now, and it’s always fantastic to see the ladies and gents in head-to-head competition.

And if the evening’s festivities weren’t already enough, the Kansas City Junior Roller Warriors will be playing an exhibition bout between the two games! Make plans now to join Fountain City for this phenomenal send-off to the 2018 season.

Doors at B&D open at 5:30 p.m. Saturday night, and the first whistle is at 6:00. Adult tickets are $12, and everyone under the age of 18 is admitted free. Advance tickets are still available at Brown Paper Tickets.