Every year, the two best teams in KCRW battle it out for what’s become known as the Warder Cup. That’s the coveted championship trophy named after Coach Ice, the legendary coach of the Kansas City Roller Warriors All-Stars who passed away two years ago this month.

This Saturday night at Memorial Hall in KCK, the fiery Knockouts and the dreaded Dreadnought Dorothys will clash for the trophy, the title, and an entire year’s worth of bragging rights.

So let’s take a look at how these teams compare.

Both the KOs and the Dorothys boast impressive 5-1 records on the season. The only games they’ve lost this season have been to each other, and a quick glance at the numbers will actually tell you quite a bit. We’ll include numbers from the Vixens and the BES for comparison’s sake too:

* indicates these numbers include scores from Game 6 last month in which the BES foreited at halftime. The Vixens led 82-69 at that point, and final calculations are based on that halftime score, in case you’re wondering why their point totals are so much lower.

How They Stack Up

As you can see, the Knockouts hold a slim lead in total points scored on the year, just eight more than the Dorothys.

However, the Dorothys have allowed the fewest points of any team in the league, and it’s not even close: only 901 on the year, compared to their nearest neighbors, the KOs, who have allowed 1,040.

Because of this, the Dorothys also boast the best point differential in the league this season with +441, compared to the KOs’ already impressive +310 on the year.

Head to head, the Dorothys have outscored the Knockouts 408-393 this season, a slim 15-point margin under the WFTDA rule set.

Folks, this is tough. 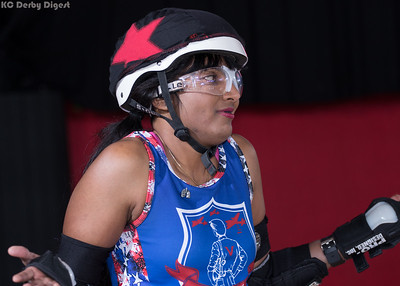 Based on these numbers and the way the wind appears to be blowing at this point in time, we’re predicting a Dreadnought Dorothys win by no more than 12 points.

Overall, the numbers are extremely close. Much has been made of the Knockouts‘ undefeated streak, which only came to an end last month, but ultimately, we believe it comes down to what seems to be a dominant defensive effort on the part of the Dorothys, given their unmatched point differential and impressive points-allowed stats.

Either way, fans are guaranteed a slug-fest this Saturday night, and we hope you’ll all join us for the history that will unfold on the track before us.

The Rink of Fire championship will take place this Saturday night at Memorial Hall in KCK. Doors open at 5:00, and the games begin promptly at 6:00.

Advance tickets are still available through Brown Paper Tickets for $10 for adults and $5 for kiddos ages 6-12. Prices go up to $15 and $10, respectively, if you get them at the door.

The first bout of the night features the annual grudge match, this time between the 2-4 Victory Vixens and the winless Black Eye Susans. And of course, the second bout of the night will be for all the marbles, so don’t miss it!

Join us at Memorial Hall this Saturday night for what’s sure to be a Rink of Fire blowout!