It was an incredible, harrowing weekend of roller derby at B&D Skate Center in Independence, between Fountain City’s Women’s Division Game 3 Saturday night and the Sunday morning debut of the Zombie League, who kicked off their 2018 season against Franklin County Fury with a comeback win in the final period.

Of course, the real story of the weekend has to be the Deadly Sirens, who are headed to the Fountain City championship bout for the first time since 2011. Now, keep in mind, ’11 was the first season for the four house teams, and for a while that year, it looked like the Sirens might go undefeated and untouched. They didn’t lose their first game of the year until very late in the season — after they’d lost their top-scoring jammer — and although there was little doubt they’d win the championship that year, they wound up dropping the big game to the Lovely Lethals and remain, to this day, the only team in Fountain City to have never taken home the trophy.

That could all change this season. 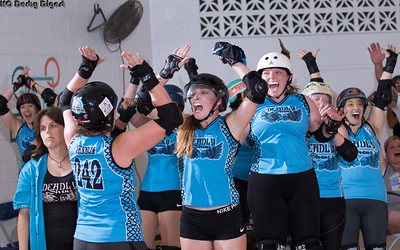 The Sirens are back!

Given the way the last few years have gone, we naturally assumed the Royal Pains would pull out the win this weekend and we would see another titanic struggle between them and the Sheilas for the house trophy. But as we mentioned back in January, the Sirens opened the 2018 season with such a bang that we wondered if maybe they wouldn’t shake things up for us this year, and ultimately, that’s just what they did.

If you follow us on the Twitter, you saw what a slugfest it was Saturday night between the Sirens and Pains. They were tied 10-10 at the end of the first period and 33-33 at the half. The Pains led 50-45 at the end of the third quarter, but the final minutes of the fourth period were pretty anxious as the two teams traded the lead back and forth until the very last jam of the game. After the referees convened and confirmed what they’d seen in the last jam, they announced the Deadly Sirens had indeed edged out the Royal Pains by a final score of 69-68, giving the fans at B&D exactly what they came to see — top-notch, edge-of-your-seat competition. It couldn’t have ended any better.

The Women’s Division championships won’t take place until September, and we’ve got quite a bit of Fountain City action to enjoy between now and then, so stay tuned to KC Derby Digest, both here and on social media, and we’ll keep you up to date on all the goings-on.

Congratulations to the Deadly Sirens for making the championship game this season! We can’t wait to see how it all shakes out.